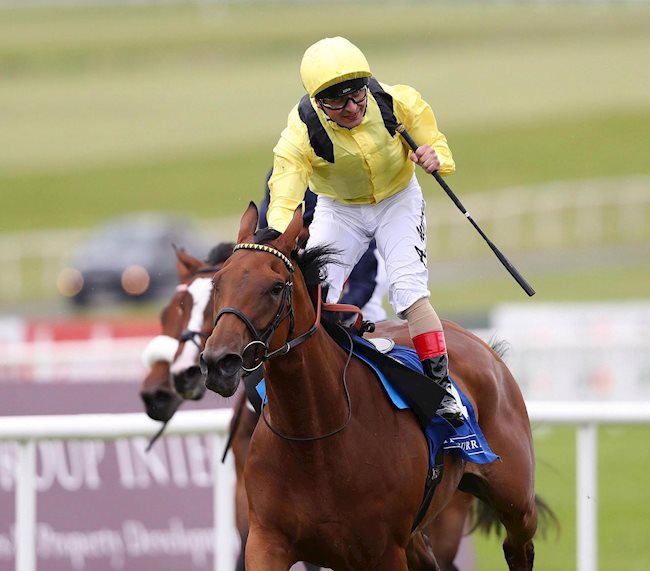 For the first five starts of her career it was very much like mother like daughter for Sheikh Ahmed’s filly Nezwaah, a product of a union between the top-class stallion Dubawi and 12f Listed winner Ferdoos.

Ferdoos won her first two starts as a three-year-old, placing in a Listed race third time out and winning at that level over next time, a pattern matched to the letter by Nezwaah to the extent both conspired to come home last in a G2 on their fifth outings!

Happily, unlike her dam that run wouldn’t prove to be the fifth and final for Nezwaah. She began her career in low-key circumstances, winning a maiden and a handicap on the all weather at a time when marks were allocated straight away should a horse win their first or second start, with her first turf appearance coming in the 10f Oaks trial at Newbury in mid-May where she finished in front of future G1 winner Queen’s Trust. Black type secured, she progressed to comfortably win a 10f Listed race at Newcastle before a bump in the road at Deauville followed by a fine second to So Mi Dar at Yarmouth.

Nezwaah’s three-year-old season ended with a 7th beaten two lengths in Canada’s G1 E.P. Taylor, and she finished the year 2lbs below her dam’s official rating of 110. There was no need to raise that mark after a very easy Listed success on her return at four, but reassessment was required after her trip to Ireland in July for the G1 Pretty Polly Stakes. Steadily backed throughout the day against a field containing the likes of G1 winners Journey & Zhukova, Nezwaah was held up in rear and was electric when produced with her run by Andrea Atzeni, galloping clear from the furlong pole to be over three lengths clear at the line, the performance considered worthy of a new OR of 116. Such was the impression she made that only Enable – at that time a King George and dual-Oaks winner – was ahead of her in the betting for the Yorkshire Oaks in August, but although she ran respectably that change of gear she’d displayed at the Curragh wasn’t in evidence as she came home 4th of the six runners.

Nezwaah would be well below her best on her final two starts in North America but retired to join Sheikh Ahmed’s broodmare band as a top-level performer.