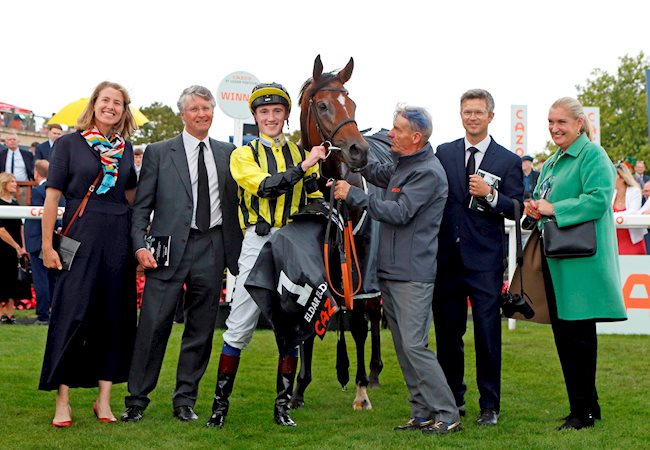 “Sometimes the longer you do something the harder things get and the more you crave the big successes. We'd only trained three years when Kingston Hill won the St Leger, so this is a very sweet success.”

At a time when everyone needed a bit of a pick-me-up following the passing of the Queen, ELDAR ELDAROV provided just that when running out a superb winner of the rescheduled Sunday St Leger at Doncaster on 11th September - giving Roger his second success in Britain’s oldest Classic, 8 years after KINGSTON HILL’s victory.

ELDAR ELDAROV caught the eye early, attracting a £480,000 price tag at the Arqana Breeze Up Sale - knocked down tie Oliver St Lawrence on behalf of His Highness Sheikh Khaled’s KHK Racing. On his sole juvenile start at Nottingham, he did not disappoint. 2f from home, David Egan hit the switch and was met by a tremendous response from the breeze up graduate, who scorched away from the field for an impressive 5L success in the 1m½f contest - an exciting taste of what was to come.

After a winning reappearance on the AW in May, ELDAR ELDAROV faced a big step up in class and distance for the 1m6f G2 Queen’s Vase. Jockey David Egan was content to sit in the chasing pack for the majority of the trip, and was nearer last than first when turning for home, but the gritty son of Dubawi came from the clouds to steal the narrowest of victories in a nail-biting photo finish. It was at this point that St Leger dreams were raised.

“He's put in a hell of a performance on only his third start. He's very good and stays very well. I think he's only going to improve and you have to hope down the road he could develop into a St Leger horse” - RV

A month later he made the trip to France for the G1 Grand Prix de Paris, running a respectable fourth in testing 36°C heat with the winner Onset going on to push Luxembourg all the way in the Champion Stakes.

The team made the trip to Doncaster quietly confident of a big run from the Royal Ascot hero who had been looking and working well at home in the two months since his Paris run. In true fighting style fit for his MMA namesake ELDAR ELDAROV delivered, swooping late to clinch the lead and win going away in the hands of David Egan.

ELDAR ELDAROV was bred at Kirsten Rausing’ Lanwades Stud. He is the third foal out of the SEA THE STARS Stakes-winning mare, ALL AT SEA, herself a daughter of multiple G1 winner ALBANOVA. Eldar Eldarov became his sire Dubawi’s 53rd G1 winner.