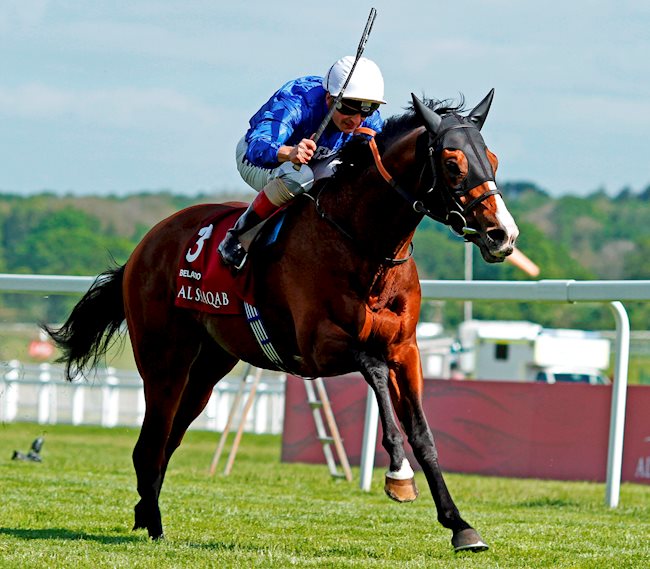 The third of four individual G1 winners for Roger in 2014, Belardo was purchased for €100,000 from the Arqana as a yearling and originally raced in the easily recognisable colours of Prince A A Faisal.

The Lope De Vega colt made a straightforward debut at Yarmouth over 6f and was immediately pitched into G2 company for his next start in the July Stakes at Newmarket. He ran a sound race to be fourth behind one of the season’s top juveniles in Ivawood, with the placings filled by subsequent G1 winners Jungle Cat and Muharaar. Having claimed Listed honours in ready fashion at Newbury on his first try over 7f he was again held back in G2 company in the Champagne Stakes at Doncaster, and at that stage he looked just shy of a very useful bunch of top-level juveniles, just seemingly being unable to quicken with them at the business end of races.

That theory was put to bed when a combination of his raw ability, a first time hood, and soft ground over 7f saw him show his full capabilities in the G1 Dewhurst at Newmarket. Just the six runners lined up, of which Belardo was made the outsider in the betting ring, and Andrea could see all five rivals as he settled in rear, making headway 2f out and overcoming a rough passage to burst to the front and eventually win going away.

Having been purchased by Godolphin over the winter, surprisingly for one of his ability he just wasn’t quite able to win as a three-year-old, although he was very highly tried including an adventurous attempt at the Haydock Sprint Cup. A 2000 Guineas 4th and a close-up 2nd to Solow in the QEII on Champions Day were the highlights of that season, but he was back in the winners’ enclosure first time out as a four-year-old after comfortably taking the Listed Doncaster Mile, off the back of which he was a little below par as favourite for the G2 Sandown Mile.

The G1 Lockinge, however, was to be his return to the big stage. Reunited with Andrea for the first time since they combined in the Dewhurst, the pair again gave a head start to their rivals but finished best of all under a full drive, eventually coming home a length clear of Euro Charline in second. The handicapper decided the performance deserved a mark of 119, one which he would repeat when going down just 1/2L in the G1 Queen Anne Stakes at Royal Ascot, his final start before his retirement to stand at KildanganStud in Ireland.