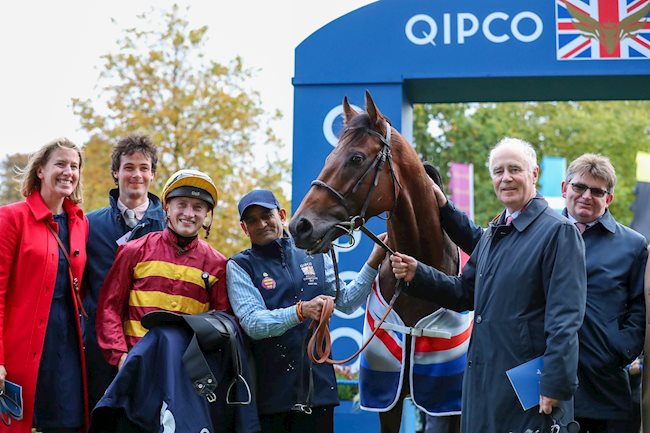 An impressive 3¼L winner on debut at Newbury in 2021, BAYSIDE BOY went on to stamp himself as one of the leading juveniles of his year, contesting all the right races. He secured Group success when besting one-time Derby contender Reach For The Moon in Doncaster’s G2 Champagne Stakes, before placing twice at the highest level in the G1 Dewhurst Stakes and the G1 Vertem Futurity Trophy at the back end of the season.

He wintered well and did everything right in the run up to his three-year-old reappearance, warranting a direct Classic route to the G1 Poule d'Essai des Poulains, but the son of New Bay took a while to rekindle the sparkle he exuded as a two-year-old, slightly losing his way on firm ground.

A bit of cut at Sandown saw him bounce back to winning ways on his fourth seasonal appearance in the Listed Chasemore Farm Fortune Stakes, a confidence-boosting run which set him up well for a tilt at G1 glory in the Queen Elizabeth II Stakes on Ascot's Champions Day.

Sent off at 33-1, but with the soft ground in his favour, it wasn't until the closing stages that the eye was drawn to BAYSIDE BOY and the prospect of victory loomed near. Sitting towards the rear of the field early on, the three-year-old colt was left to reel in the leaders up the home straight. A final burst carried him to a length-and-a-quarter success over Godolphin's Modern Games, with the long-time race leader Jadoomi a further short head away in third.

Roger said: "I'm delighted for the owners, Teme Valley and Ballylinch Stud, who have been very patient," he said. "He won very nicely last time at Sandown which was a good confidence-booster for the horse. I'm delighted with him today and I'm looking forward to watching it again!"