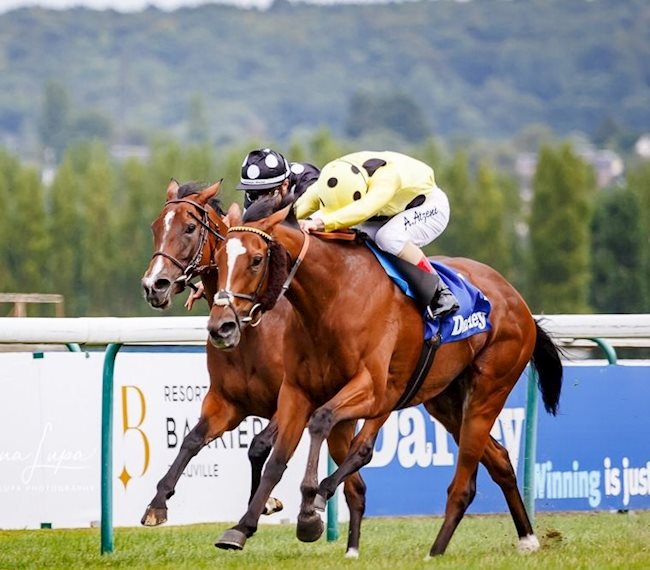 A daughter of Teofilo out of a Listed-placed mare, Ajman Princess made her debut in April 2016, at which point pedigree-wise she was a half-sister to ill-fated but useful handicapper Naqshabban & to a fair hurdler/chaser. Fast forward four seasons and she can claim G2-winning miler Ostilio, Wokingham and G3 winner Cape Byron, and G1-placed Imperial Charm as siblings, as well as being a G1 winner herself!

None of Ajman Princess’ siblings achieved any of their black type as juveniles and the filly didn’t make the track as a two-year-old, debuting in a 10f Sandown maiden in mid-April at three and finishing a solid second for her owner Sheikh Mohammed Obaid. She was favourite for her next start but was beaten by subsequent Listed winner Abingdon, and another 2nd at Leicester on her first try at 12f means she lined up a maiden and an unconsidered 33/1 chance for the G2 Ribblesdale Stakes on unseasonal soft ground at Royal Ascot. Although still a maiden after the race, Ajman Princess considerably improved on her earlier level of form in finishing second again, suggesting a maiden would be a formality and a black type success a real possibility.

It would’ve been one of the great shocks in racing has she been beaten on her first start as a four-year-old at Lingfield considering she went off an incredibly skinny 1/20, and having breezed through that assignment she put up a very smart performance to win the Listed Daisy Warwick Stakes at Goodwood a month later despite real market weakness. Three consistent runs in pattern races followed over the summer as the filly picked up more black type at Haydock (twice) and Yarmouth, each time racing prominently with a lead and sticking on well.

A couple of changes were made before her return to the top level in the G1 Prix Jean Romanet at Deauville with cheekpieces applied for the first time and the decision to attempt to make all rather than take a lead, and Ajman Princess put in a tremendously gutsy performance in a decent renewal of the 10f G1, never seeing another rival under a good ride from Andrea Atzeni. Unfortunately the same tactics didn’t pay off on her final career run in the Prix Vermeille and she retired to become a broodmare for her owner.