A good start to the week with a double across the card for the team at Ripon this afternoon. CLAIM THE CROWN got up when it mattered to score in the feature race of the meeting The Armstrong Memorial Handicap followed by GLAM DE VEGA shortly after landing the Sky Sports Racing Virgin 535 Maiden Stakes completing the treble for the inform Jack Mitchell.

Teme Valley’s CLAIM THE CROWN did just that to get the team of to a flying start at Ripon. Group 3 placed as a 2YO the move up in trip was a favourable move for the three-year-old son of Acclamation. Piloted today by Jack Mitchell the pair had to work hard and CLAIM THE CROWNS stamina was put to the test as he moved from near the rear to the front in the closing stages. Hitting the line in front to deny the market favourite MYRISTICA who had to settle for runner up spot 1 ¾ lengths behind.

GLAM DE VEGA in the iconic yellow and black spots of Sheikh Mohammed Obaid Al Maktoum, were next on the winner’s podium. A pleasing seasonal debut after a 243 day break since the colts last run in November where he took runner up spot to the Walk Of Stars at Nottingham. Today patience paid off, as the three-year-old son of Lope de Vega went one better to justify favouritism under Jack Mitchell. Keeping on well until the line to land the spoils one length ahead of KAATIB from the Simon and Ed Crisfords yard in second. GLAM DE VEGA looks a smart prospect and we look forward to what more has to come from this colt.

Congratulations to all connections. A pleasing start to the week with a double on the day for the team and a treble for the in-form Jack Mitchell across the card. 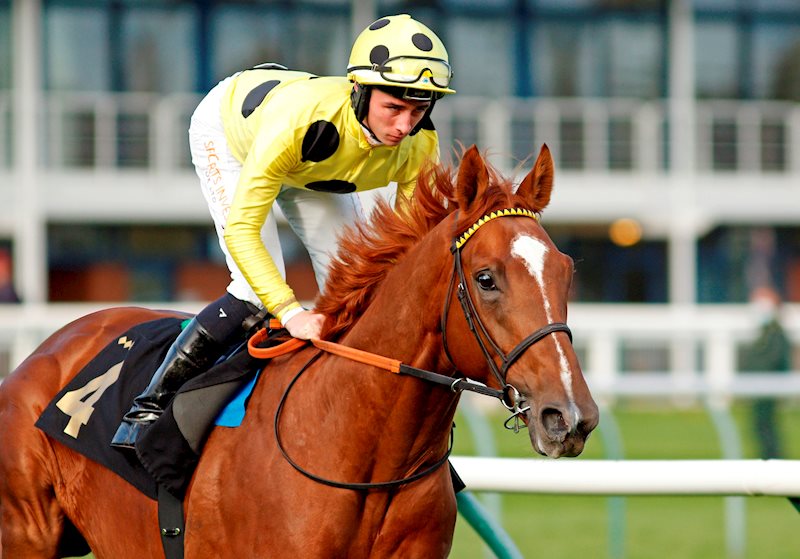