The flood gates are open as the winners keep flowing with another treble on the day for the team at Varian Stable. QABILAH, ENFORCED and CANNY FETTLE completed the second hat-trick in two days producing an impressive strike rate of 60%. 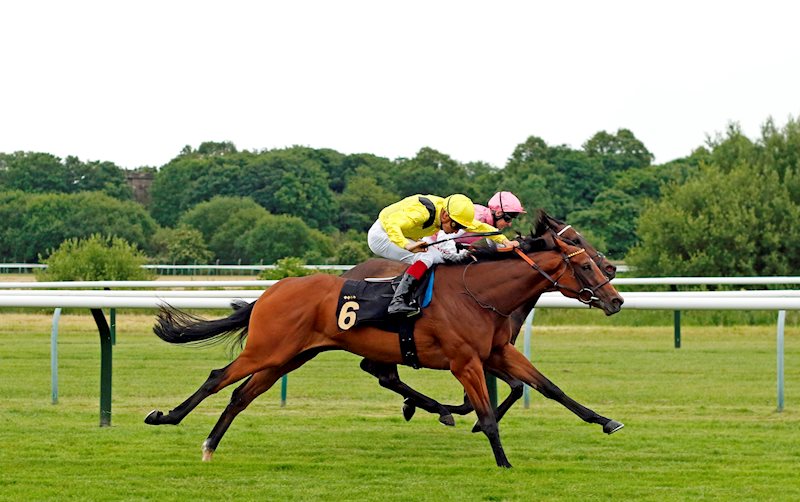 QABILAH was the first winner of the day, benefitting from the move up in trip from her third on debut at Thirsk. Today partnered with Jefferson Smith at Nottingham, the three-year-old KITTEN’s JOY filly left it late in the day but got on top when it mattered to score in the racingtv.com Fillies' Novice Stakes denying the race favourite WONDERFUL TIMES from the John and Thady Gosden yard. A promising run for a second appearance and she remains an exciting prospect this season.

The iconic colours of Sheikh Ahmed Al Maktoum were carried across the line in style by Jack Mitchell and ENFORCED. Getting off the mark in a one mile Novice at Brighton earlier in the month ENFORCED used his experience to land the spoils in the Cheffins Handicap at Newmarket in a determined fashion. Bred for one mile two furlongs there could well be more improvement to come from this son of Zoffany.

A second win for Merry Fox Stud in as many days, as CANNY FETTLE completed the treble on the day for the team . David Egan putting in a smart performance, picking his way through the field and passed the leaders in the closing stages, keeping and taking up the running in the final 110yards. CANNY FETTLE’s stamina prevailed as the son of Distorted Humour hit the line with plenty left in the tank to claim the prize in the Pertemps Network Handicap.

Congratulations to all our owners and connections today and the team at home, another storming performance from the team to achieve two trebles in consecutive days.​