It has been a busy few days for the Varian Stable, with plenty of runners producing notable performances to report. 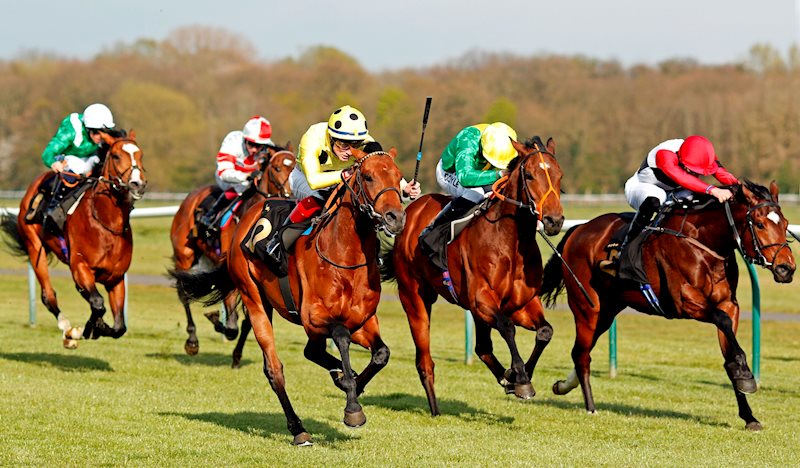 THIRD REALM gets home in front under David Egan in the RacingTV Profits Returned To Racing Maiden Stakes.

SAVE A FOREST makes it a double for the Gredley family in the Sky Sports Racing Sky 415 Fillies’ Handicap at Windsor today. Continuing her winning form from Wolverhampton at the end of March where she broke her maiden, Save A Forest displayed a good turn of foot under Callum Shephard to take the lead in the final 110yds. The full sister to Group 3 placed Father of Jazz looks like going up in trip suited her well, with all to show in the closing stages.

THIRD REALM (pictured) took a step forward from a promising first effort to get off the mark on Saturday at Nottingham, in the Racing TV Profits Returned To Racing Maiden Stakes. Stamina proved a strong point as he ran on well in the closing stages under David Egan, hitting the line strongly to beat the newly gelded Remedium from the Richard Hannon yard. The Sea The Stars colt has definitely built on his debut after 150 days off and we look forward to seeing what more he can show with a Derby entry in hand.

NAGANO ran very well on debut in the Wood Ditten, the 3YO by Fastnet Rock took a while to get the hang of things, but it was a perfect introduction as he did all of his best work at the finish. He looks likely to be a very nice horse and we will see what he can do on his next run over a similar trip.

SAINT LAWRENCE ran extremely well in a very good handicap at Newbury on Friday, finishing second of 16, beaten by a neck having looked the winner a furlong out. He was pipped at the post by a very nice horse of John and Thady Gosden’s called Mithras, who is probably a group horse in time. It was a good first run back after six months off, with a respectable placing amongst some high calibre contenders, which was reflected in the result with the right sort of horses in third and fourth.

INVINCIBLE SWAGGER ran at Thirsk on Saturday where he was beaten by 3/4 of a length by another nice horse, George Peabody, who is probably a Royal Ascot handicapper. The Invincible Spirit colt is coming forward with each run and will be better suited to a faster paced race.

FANTASTIC FOX ran a very good race in an extremely strong maiden at Newbury yesterday. The winner, the Richard Hannon trained Snow Lantern, is now 6-1 for the 1000 Guineas and she looks a very good type beating Fantastic Fox by 1¾ lengths. Again, a very promising run from the Frankel colt, with what looked like good substance to that form, finishing behind the half-brother to Enable, Derab.

TITLE shaped with a deal of promise when runner-up here at Newbury (over 1mile) on his sole run as a juvenile. On this occasion in the MansionBet Beaten By A Head Maiden Stakes Title travelled extremely well, although he will probably be suited to a stronger pace. No doubt Title will improve for the run and so we look forward to seeing what this Camelot colt can show on his next appearance.

All in all, a very satisfactory period for the yard, with some strong wins as well as plenty of winning form.