The enigmatic seven-year-old ran only three days earlier in the Scarborough Stakes where he fluffed the start and never got in the race.

Off top-weight with a first-time visor, Steps was a different proposition on Saturday and travelled supremely well in behind under Louis Steward.

He quickened up well to take the lead with a furlong to run and despite hanging towards the near side rail, he ran on strongly to win by a length and a half.

Roger said: "“He lost out narrowly in this two years ago, so it's nice to finally win it. He's a real favourite in the yard and I'm pleased for his owner Michael Hill who has been a big supporter of mine.

“We tried different headgear today and I'm sure that has made a difference, as did the fact he broke on terms, something he didn't do on Wednesday.

“Louis has got a good record in these big handicaps and he can add a Portland to that now.

“The drop of rain has helped him and he came out of the gates on terms. The visor has helped and Louis has given him a great ride. He has run very well at the highest level and he deserved to big handicap like that so I'm thrilled.” 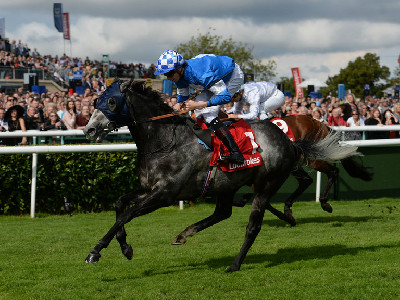