The Cheveley Park Stud-owned filly tackles 6f for the first time in the Group 3 Summer Stakes at York.

The daughter of Starspangledbanner won on her seasonal debut at Leicester before contesting the Duke of Cambridge Stakes at Royal Ascot.

The soft ground went against her that day and she also shaped as if a drop back in trip would suit.

Roger said: “Spangled has shown plenty of speed in her races as well as in her work at home. As such, we feel that she deserves a crack at six furlongs. She will be suited by the fast ground and goes there in good form.”

Central Square bids for a three-timer in the 1m4f handicap later on the card. Steve Parkin’s son of Azamour has won at Windsor and Ayr this season and we are looking forward to him stepping up in trip.

Roger added: “Central Square is an improving four-year-old. He shaped as though a mile and a half would suit when he won at Ayr and we are optimistic that he can continue his progression.”

At Newmarket, Salem Rashid’s Aljuljalah lines up in the 7f fillies’ handicap, a race we won last year with Spangled.

The daughter of Exchange Rate didn’t handle the soft underfoot conditions at Royal Ascot, but a return to the form of her York second behind Nemoralia would see her be very competitive.

Roger said: “Aljuljalah has been working nicely and goes there in good form. If you put a line through her last run then she has very strong form and should run well.”

Fujaira Bridge makes his debut for owner Sheikh Mohammed Obaid in the 7f maiden while Prince Faisal’s Soloman’s Bay heads to Ascot for the 6f maiden.

Last but no means least is Nurlan Bizakov’s Steve Rogers, who tackles the 1m6f handicap at Ascot.

The son of Montjeu is a five-time winner and was not disgraced in the Northumberland Plate last time out.

Roger said: “Steve Rogers has come out of his run in the Northumberland Plate well and he should be competitive in this grade.” 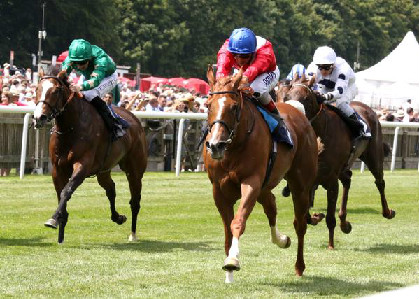