The son of Acclamation, who is owned in partnership by Steve Parkin and Cheveley Park Stud, has always promised much at home and it all clicked for him on the track yesterday.

He relaxed beautifully in the hood under Andrea Atzeni, tracking the leaders up the inside rail.

Andrea switched him off the rail to make his challenge and he showed a good turn of foot to strike the front inside the furlong marker.

He was kept up to his work and ran out a ready winner, beating Steve Parkin's other runner Rex Imperator by two lengths.

There was drama after the line when he slipped up on the bend, hurling Andrea into the turf. Thakfully both horse and rider are none the worse.

Roger said: "He has taken a while to get his act together but we have always thought a lot of him. He ran very well on his seasonal reappearance in what was a very strong Palace House Stakes and running him over five (furlongs) has helped him settle and race properly.

"He has beaten some good horses there and I think he can make his mark in the bigger sprint races later in the year." 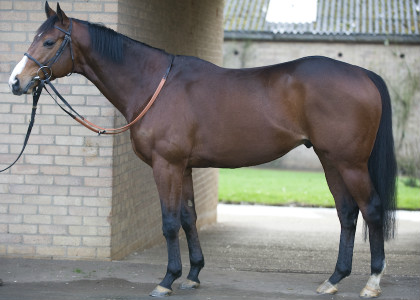