The daughter of Dark Angel won the Listed Dick Hern Stakes at Haydock on her first start for us having been purchased at the Goffs London Sale back in July.

This had been her target since that success and the drop back to seven furlongs proved no obstacle for this improving three-year-old.

She raced on the far side of the field, travelling well in behind runners under Jack Mitchell.

She moved up to challenge for the lead at the two furlong pole, striking the lead with a furlong to run.

At this point she drifted towards the runners on the stands side. Desptie this drift her momentum was never stopped and she galloped on strongly to win by two and a quarter lengths.

Roger said: "I didn't think she'd win like that, but I thought she'd run really well. Probably she was over-priced for a filly that won a Listed race last time out. Her work has been very good and she shows plenty of speed, so I didn't think coming back to seven furlongs would be an inconvenience.

"We'll have to see what's left for her. She was very impressive today and was in good form. We'd be reluctant to stop her if there were more options coming up." 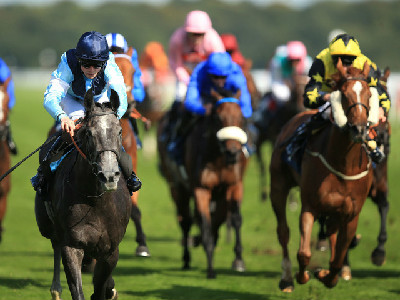