A scintillating success for the unbeaten Qabala in the G3 Nell Gwyn Stakes has propelled Sheikh Mohammed Bin Khalifa Al Thani’s filly to the head of the betting for the 1000 Guineas, with just a couple of weeks to go until they go to post for the one mile Classic.

Positioned in midfield having just missed the start half a beat under first-time pilot David Egan, the daughter of the en vogue Scat Daddy took a couple of strides to wind up but once she did it was apparent some way out that those in front of her were well within her range, and the margin of one-and-three-quarter lengths back to stablemate Mot Juste reflected her clear superiority on the day. She is clearly at home on the quick ground and at the track having won her maiden over course and distance, and granted a clear run into the race she will now be aimed at the first fillies’ Classic on May 5th.

G3 Oh So Sharp winner Mot Juste ran a fine race back in second for Andrea Atzeni, showing her trademark will to win and confirming form with Angel’s Hideaway from their meeting at the same track in October. Like the winner she relishes fast ground – she’s bred on the same cross as the yard’s fast ground G1 winner Cursory Glance – and her form suggests she also deserves to line up in the Guineas. 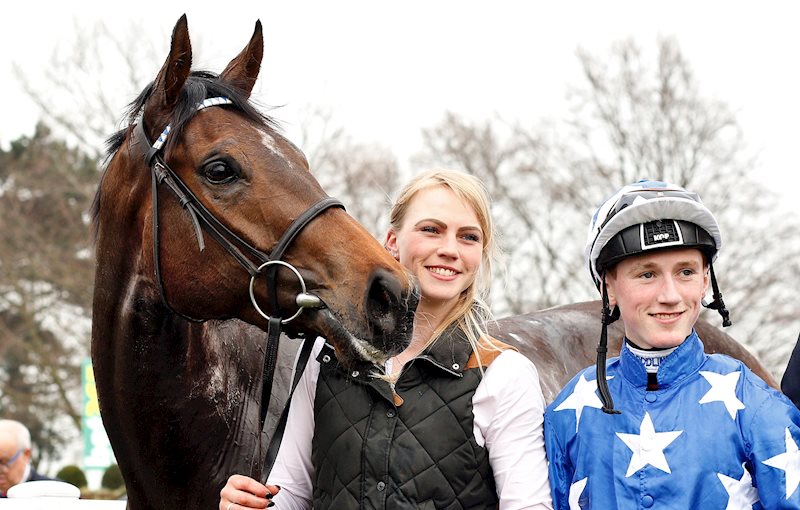 Qabala led up by Flo Hermans and ridden by David Egan

With the likes of Nausha, Nearooz and Lastochka winning first time out in the twilight of last season it was hoped that the yard were building a strong team of fillies for 2019, and after yesterday’s result it appears there should plenty to look forward to over the next six months.

Success in the Nell Gwyn formed the centrepiece of a fine treble on the day, sandwiched as it was between Flavius Titus’ gutsy effort in the 4yo+ sprint handicap off 91 & a smart front-running ride from Jack Mitchell on the penalised novice Invitational at Wolverhampton.

Sheikh Mohammed Obaid’s Flavius Titus confirmed his liking for fast ground and is likely to have plenty of options off his to-be-revised mark over six and seven furlongs. The year younger Invitational – a daughter of Poet’s Word owned by Ziad A Galadari – overcame a tricky draw in 10 over seven furlongs at Wolves with Jack utilising her early speed to get her over to control the race. From there it was almost a re-run of the pair’s success at Kempton in January and she looks to have a bright future over the same kind of trip.