Saleh Al Homaizi and Imad Al Sagar's five-year-old had failed to fire on her first two starts of 2015 but her recent work had been good and the signs were pointing towards a return to form.

Her best efforts from 2014, including second to Ribbons in the Group 1 Prix Jean Romanet and in this race, was the best form on offer and ran out a ready winner under Joe Fanning.

Joe always had Princess Loulou in a handy position on the heels of the leaders. He kicked for home at the two pole and she soon skipped clear of her rivals.

She began to tire as the line approached but Joe had kept enough up his sleeve and she held off Latenightrequest by a length and a half.

Roger said: "I am thrilled. She was kept in training as a five-year-old to win a Stakes race and her owners have been patient to wait until now. She now heads to the paddocks as a Listed winner and Group 1 placed and is a lovely breeding prospect.

"She has thrived recently at home and Joe has ridden her perfectly. He kicked at the right time, gained the momentum and she toughed it out." 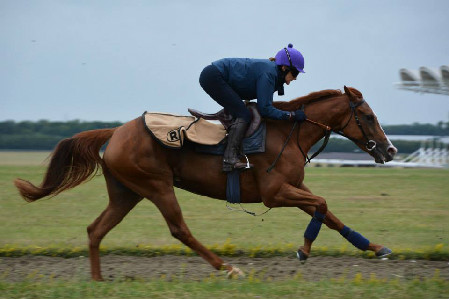 Princess Loulou in action on the Cambridge Road polytrack