As was the case with yesterday’s Geoffrey Freer Stakes winner Defoe, who also carries the yellow and black-spotted silks of Sheikh Mohammed Obaid, Ajman Princess was forced to survive a stewards’ enquiry after passing the line a length and a quarter to the good of Siyoushake.

However, there was nothing too serious for the officials to debate and she was soon confirmed the winner of this €250,000 prize, whose roll of honour includes last year’s subsequent Prix de l’Opera heroine Speedy Boarding.

An admirably-consistent filly who did not break her maiden until March this season, Ajman Princess won the Listed Daisy Warwick Stakes at Goodwood in May and she has since been placed in competitive Group company at Haydock Park.

Fitted with first-time cheekpieces and allowed to bowl along from her draw in stall eight, Ajman Princess produced a clear career-best in claiming the scalp of the dual Group 3 winner Siyoushake, with the G1 Prix Vermeille winner Left Hand back in the third and the Sir Michael Stoute-trained Smart Call running on late to finish fourth.

Roger said: “That was very satisfying. I have to thank Sheikh Mohammed Obaid as it was his idea to change the tactics and make the running with her.

“She liked the ground – it had dried out in her favour – and she’s a good-striding filly who was given a very, very good ride by Andrea.

“She’s a Group 1 winner now, so she owes us nothing else, but her future options could include races like the Prix de l’Opera at Chantilly in October as well a couple of options at the Breeders’ Cup.” 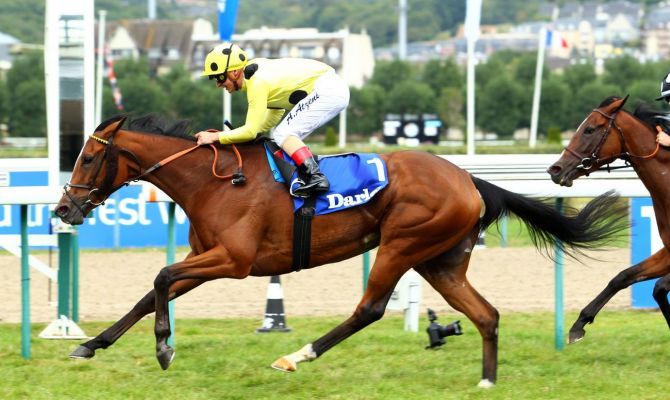