Sheikh Mohammed Obaid’s son of Dubawi ran out a ready winner of his trial over course and distance three weeks ago but improved again to win this £4million contest in stunning fashion under Andrea Atzeni.

The field were taken along at an even tempo by Highland Reel and Andrea was happy to settle Postponed at the on the heels of the leaders.

He cruised up to Highland Reel at the two furlong marker before quickening clear under hands and heels. The Japanese star Duramente went in pursuit but Postponed was in command and went on to win by two lengths.

A delighted Roger said: “It was good to watch. I was happy from the outset.

"I'd like to thank Sheikh Mohammed Obaid and the team at home.

“He's a very good horse, he had already won a King George when we got him, but he has thrived out here. The team out here with him did a great job, as did the team at home before that, so big credit goes to my staff.

“The big mile-and-a-half races will be for him, but I'll make a plan with the owner when we get home.”

Andrea who was celebrating a birthday winner added: “I was really happy when Ryan went off in front and my horse galloped out really well.

“But it's easy when you are on a horse like him and he ticks all the boxes. I would think there's no doubt he's the best mile-and-a-half horse in Europe.” 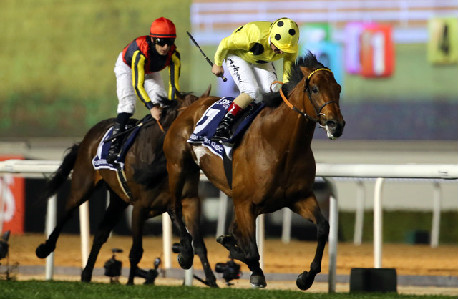 Postponed’s victory completed a double on the day for Sheikh Mohammed Obaid and the team following Barsanti’s win in the Rosebury Handicap at Kempton.

The son of Champs Elysees won easily under Jack Mitchell and is now two from two since joining us.