On entering the straight, Andrea switched to the outer and Postponed picked up in sparkling style. He surged clear under hands and heels to beat Dariyan by

Roger said:  "He won a King George and was a very, very good horse before he came to me. On the form book he was entitled to win like that so it's great that he has.

"We have had a smooth preparation with him and although he had done enough work that fitness wouldn't be an excuse today, he is a five-year-old entire horse who is entitled to come on for the run."

Andrea added: "He was very good today. The way he travelled and quickened was very impressive. He has been working well at home and Ian, who rides him everyday, has done a great job and been very happy with him."

Postponed, a son of Dubawi, will now head to the Sheema Classic on Dubai World Cup night. 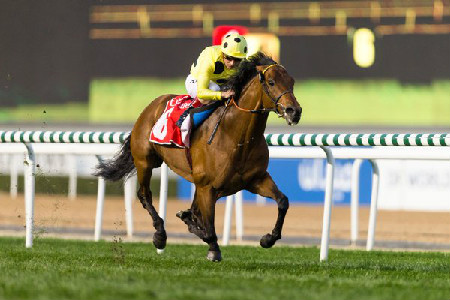 Postponed in winning action at Meydan