Owned by Sheikh Ahmed Al Maktoum, Nezwaah enjoyed a fruitful campaign last season, winning three times on the all-weather, including a three-length success in the Listed Hoppings Stakes at Newcastle in June.

The daughter of Dubawi missed her intended comeback in the G2 Dahlia Stakes at Newmarket earlier in the month following a freak stalls incident, but she put that mishap aside here, never coming off the bridle to win by three and a quarter lengths.

Having broken smartly in the hands of Andrea Atzeni, Nezwaah was reined back into third off what proved a solid early tempo, with last season’s winner Maleficent Queen cutting out the running as Irish challenger Elm Grove sat second.

Nezwaah travelled ominously well into contention as her four rivals began to work much harder approaching the final quarter mile, and despite briefly having to switch outside as a gap closed in her face, Nezwaah soon picked up once she saw daylight and scooted away in the style of an improved performer with an exciting season ahead.

Roger said: “I have always thought a great deal of Nezwaah and this was a most pleasing return to action. We dipped her into Grade 1 company last year and that is where she will hopefully end up once again.

“She currently holds entries at Royal Ascot (G2 Duke Of Cambridge, G1 Prince Of Wales’s) as well as the Curragh (G1 Pretty Polly) and we will let the dust settle before making a plan.” 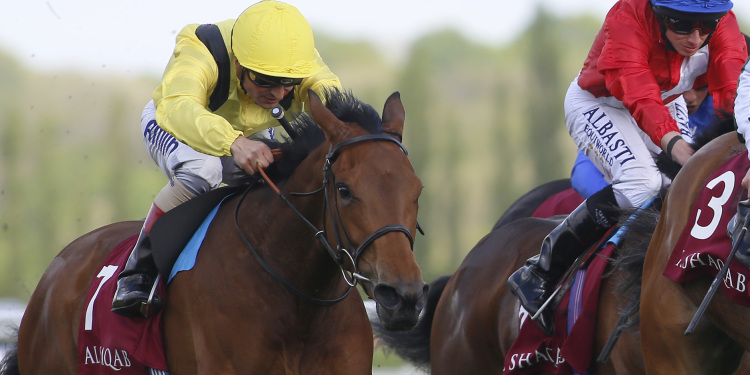 Nezwaah and Andrea Atzeni in action at Newbury last season.