Sheikh Ahmed Al Maktoum’s daughter of Dubawi also became our first top-flight winner of the season as she followed in the footsteps of former stable companion Ambivalent, who landed the spoils in 2013, by taking this €225,000 prize by three and a quarter lengths.

The Aidan O’Brien-trained Rain Goddess finished second with Jim Bolger’s Turret Rocks a further length and a half further back in third, but no filly could lay a glove on Nezwaah, who travelled beautifully under Andrea Atzeni before bursting through inside the final quarter mile to stamp her class in a stopwatch-shattering time.

A daughter of the Dansili mare Ferdoos, who Roger trained to win the Listed Pinnacle Stakes at Haydock, Nezwaah became the most illustrious member of her immediate family with this breath-taking success, also notching Group 1 win number 13 for her trainer and the first out our new home, Carlburg Stables.

Roger said: “Nezwaah is a classy filly who has always impressed in her homework. She was a Listed winner coming into the race, so this was obviously a major jump in class, but she took it all in her stride and is clearly very, very good.

“We are delighted to get this win on the board and she should continue to excite us for the rest of the season.”

Earlier in the afternoon, Prince A A Faisal’s Lahore maintained his perfect career record with a cosy success in the six-furlong handicap at Windsor under the owner’s retained rider Silvestre De Sousa.

The son of Elusive Quality was supplementing his Doncaster maiden victory in April and he did so in fine style, travelling sweetly before asserting by an eased-down half length.

On Saturday, Morando became our fiftieth winner of the calendar year as he made a first breakthrough at stakes level in the Listed Midsummer Stakes at Windsor, the final leg of an across-the-card treble.

Owned by His Highness Sheikh Mohammed Bin Khalifa Al Thani, Morando added to his maiden win over course and distance with a short-head victory over the Group 1-placed Stormy Antarctic on his first start since finishing an unlucky-in-running seventh in the Balmoral Handicap at Ascot on Champions Day.

Morando was ridden to victory by Jack Mitchell, who also partnered King Bolete to success thirty minutes earlier with a beautifully-judged front-running ride in the extended 1m3f handicap.

Owned by Sheikh Mohammed Obaid, King Bolete was regaining the winning for the first time since last June and he did so without seeing another rival, holding on gamely from the fast-finishing What About Carlo.

Last but by no means least, the yellow and black spots of Sheikh Mohammed Obaid were also carried to victory by Harry Bentley at York, who won the valuable 1m2f handicap for three-year-olds on the progressive Defoe.

The son of Dalakhani was last seen landing the London Gold Cup at Newbury in May, the form of which has been nicely-franked since, and he defied a 10lb higher mark on quicker ground, tanking through the contest and winning in the manner of a Pattern performer in the making.

Roger said: “We have enjoyed a special weekend and I am delighted for all of our owners, whose loyalty and support we could not do without.

“This is also testament to the hard work displayed by all of the team at home and we’ve enjoyed a fruitful few months as the season approaches the half-way marker. Long may it continue.” 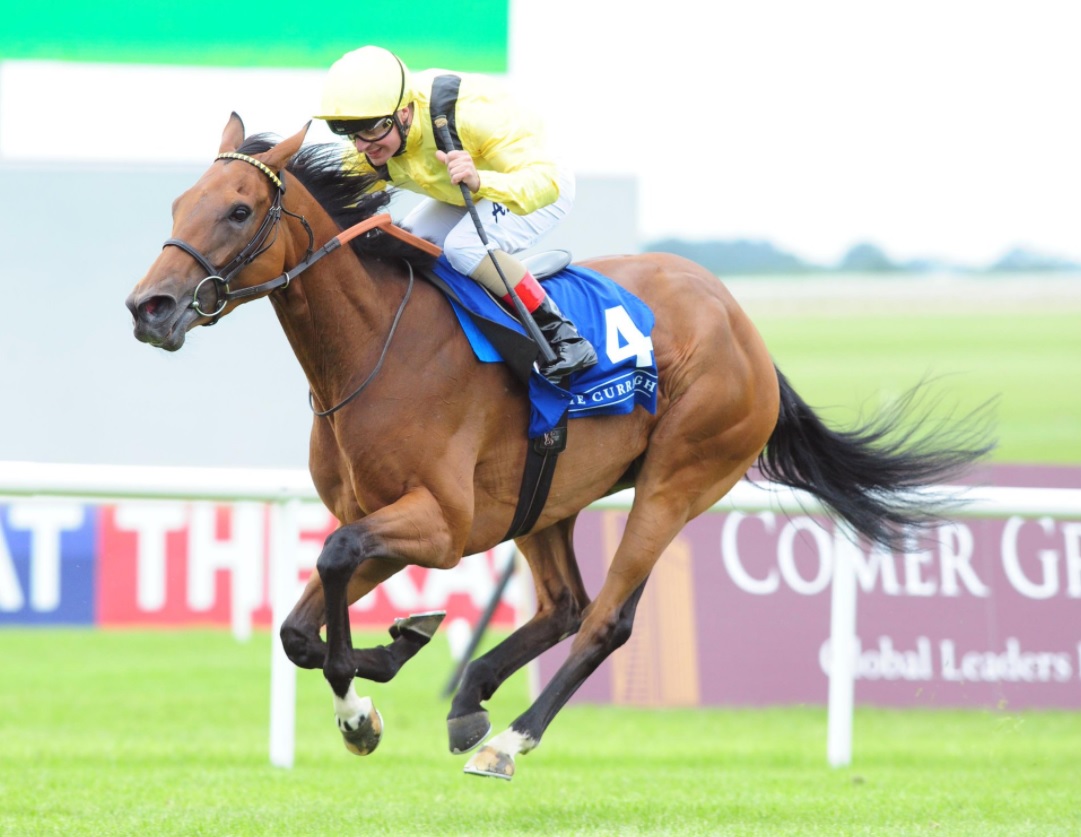 Nezwaah and Andrea Atzeni record a scintillating success in the G1 Pretty Polly Stakes at the Curragh on Sunday.