The son of Raven's Pass made a winning debut at Yarmouth last season and confirmed the promise of that success with a decisive victory in a competitive three-year-old handicap.

Mutashaded was slowly away but was soon attached to the group and travelling well in the hands of Dane O'Neill.

He switched wide coming into the straight and cruised into contention with two furlongs to run.

When Dane said 'go' Mutashaded showed a good turn of foot to take over the running and powered clear to win by two and a half lengths.

Roger said: "We have always liked this horse. He won his maiden well last season but has been a little slow coming to hand this spring.

"He will get a mile and a half and is a nice prospect for later in the season." 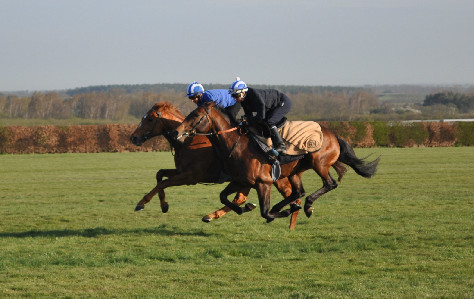 Mutashaded (near side) works under Richard Hills on the Limekilns