MISS CAROL ANN made her mark in no uncertain terms in the opener at Newmarket this afternoon. Storming up the home straight to score impressively on debut in the Blandford Bloodstock Maiden Fillies' Stakes. 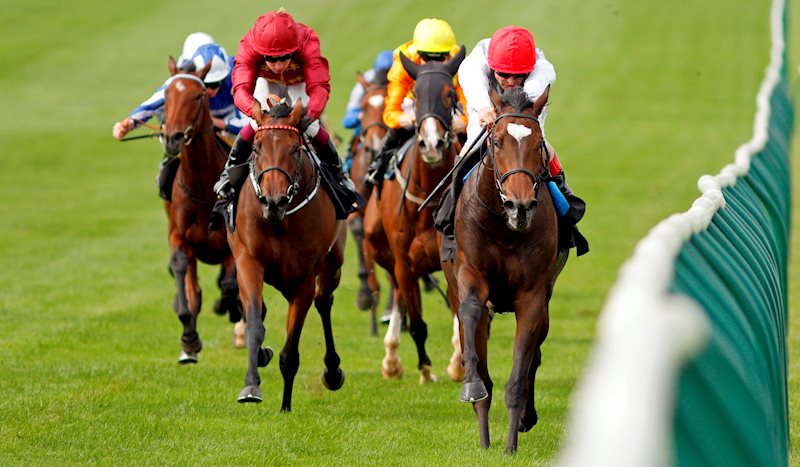 The much-anticipated debut of the Kingman filly for the patient owners of Staghawk Stables was by no means a disappointment, as Miss Carol Ann put in a favourable performance this afternoon. The first foal of a group placed Irish six-furlong juvenile winner and a half-sister to G3 winners Summerghand and Eastern Impact herself, it is evident the filly is well-bred to do the job.

Breaking well from stall six under the experienced Andrea Atzeni they found cover and tracked the early leaders of Turner Girl and Ohka in the initial stages. Running on well over the seven-furlong course and distance Miss Carol Ann moved through into second place, adding pressure to the market favourite Oheka over two furlongs out. The inside rail proved a good line of attack as Atzeni asked for more and the filly responded with a striking turn of foot, quickening impressively to take up the running against the near rail in the final furlong. Miss Carol Ann showed a strong degree of class in the closing stages, moving powerfully away and cruising to the line a comfortable two lengths clear of runner up Oheka from the William Haggas yard. Flamenco Flan and Love You Grandpa taking up third and fourth with a significant gap of 5 ½ lengths between the first four and the remainder of the field.

Many congratulations to the Crager family and Paul Hondros of Staghawk stables. It is evident Miss Carol Ann is a much adored filly, the owners having raced her dam Miss Katie Mae, and now winning with the daughter on debut at Newmarket is a wonderful result, we are proud to have been part of Miss Carol Ann’s journey to the track so far. Hopefully this is just the start as Roger certainly holds this filly in high regard. The Kingman filly remains an exciting prospect with a decent step up in class a potential next course of action in her career.