Mindurownbusiness maintained his progression with an easy win in the feature £45,000 mile handicap. The son of Cape Cross travelled smoothly under Jim Crowley before quickening up well to win by a length and three-quarters.

Roger said of Alan and Michael Spence's charge: "He is a colt on the up who is improving and that was another career best off a mark of 105. He loves this surface and although he looks as though he may stay further, he is clearly very effective at a mile.

"Good Friday is his principal aim and we'll plot his winter campaign with roads leading there."

Later on the card, Natural Nine won the 7f handicap before Markabah ran away with the 1m2f maiden.

Roger added: "The form from Natural Nine's last run at Kempton had a very strong look about it and on that he deserved to go close. He has travelled well and was probably idling a little at the finish.

"Markabah had a setback following her run at Thirsk in the summer but she is a lovely filly by Dubawi from a great late-maturing family of Sheikh Hamdan's. She was given a positive ride by Paul Hanagan and has bolted up." 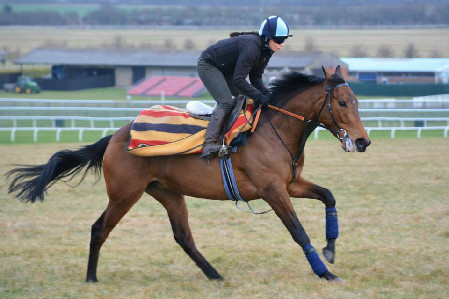 Markabah in action on racecourse side