Paul Smith's colt only made his debut on September 21, winning convincingly at Newbury before following up with a comfortable success in the Group 3 Autumn Stakes at Newmarket.

He was then supplemented for the Group 1 Racing Post Trophy at Doncaster for which he was sent off the 7/2 favourite. Again he oozed class throughout and ran out a ready winner under regular rider Andrea Atzeni.

Kingston Hill saw off the likes of Toormore, Outstrip and War Command for the top honours, following in the footsteps of former champions such as Frankel, St Nicholas Abbey and Dawn Approach. His sire, Mastercraftsman, landed the award in 2008.

Roger said: "Kingston Hill has come a long way in a very short space of time. To go from winning a maiden to a Group 1 within five weeks is quite an achievement and is credit to his constitution and talent .

"I am thrilled for the horse and for his owner Paul Smith, who is such a keen enthusiast and supporter of the sport.

"It is a very special award to receive and hopefully he can go on and follow in the footsteps of many of the champions who have won it in the past." 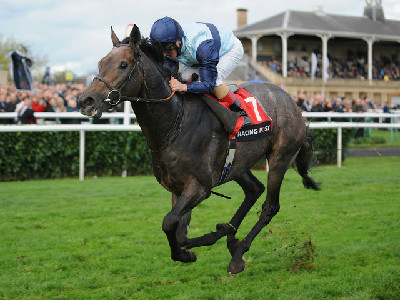