Intilaaq returned to the winners' enclosure with an impressive victory in the Steventon Stakes at Newbury. Sheikh Hamdan's colt wsa last seen finishing down the field in the 2000 Guineas but Roger had given him plenty of time to get over that run and his patience was rewarded.

Mustadeem set a brisk gallop up front and Intilaaq settled into a good rhythm in third. The leader kicked some 20 lengths or so clear on entering the straight but Paul Hanagan didn't panic and Intilaaq moved up in style.

The leader was treading water with two furlongs to run and it was left to Intilaaq and the favourite Consort to fight it out.

However, Intilaaq was by far the strongest inside the closing stages and was pushed out to win by two and a half lengths.

Roger said: "Intilaaq won well here in the spring and looked full of promise, but I´ve given him a good chance to get over the Guineas and he´s come back good.

"He is well entered up and we'll see how he comes out of this before making any firm plans. "

At Newmarket Queen's Pearl ran out a smooth winner of the six furlong fillies' handicap under James Doyle.

The Exceed And Excel filly came from off the pace to beat Secret Hint by half a length.

Roger added: "Queen's Pearl has been working nicely - she has plenty of pace and handles fast ground well." 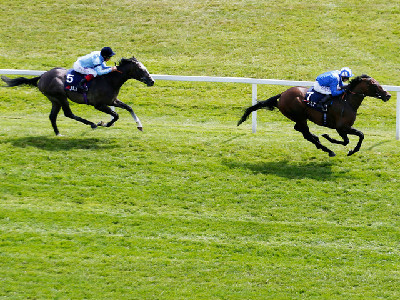