Golden Slam, a son of Pastoral Pursuits, won for owners Biddestone Racing in a 6f Novice Auction Stakes. Andrea Atzeni made almost every yard of the running and his mount stuck on gamely to win by a nose.

Andrea also did the steering aboard Jon Shack's Talent To Amuse who landed the 1m4f maiden. The daughter of Manduro tracked the pace set by Skeaping and went on to win in good style by two and a half lengths.

Roger said: "Golden Slam has improved for his recent debut and has showed a good attitude to win. Talent To Amuse has done it nicely. She travelled smoothly and stays very well." 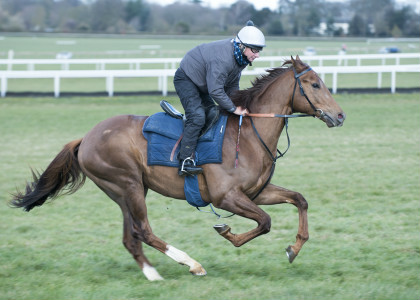 Golden Slam in action on the gallops