Fresh from a fabulous four-timer at Doncaster on Saturday, Andrea continued his fine weekend aboard Defoe in the one-mile maiden, with the two-year-old fending off the more experienced Bianca Minola to make a successful introduction.

A son of Dalakhani who is a half-sibling to seven winners, Defoe was sent off at long odds-on to open his account at the first time of asking. And he obliged in taking fashion, cutting down a rival who enjoyed the run of the race on soft ground, with Andrea not asking any serious questions as the colt got up by a head.

Roger said: “This was a pleasing debut from Defoe. It is not easy for a newcomer to make up lengths in soft ground, but he did it well and he was a little green under pressure. He should improve plenty for this.”

Andrea repeated the dose a little over ninety minutes later as Monotype benefitted from a drop in trip to win for the first time this season in the 1m4f handicap.

The four-year-old had acquitted himself with credit over further earlier in the year, most notably when runner-up to the subsequent Royal Ascot winner Kinema in May.

But he showed he has more than the requisite pace for twelve furlongs here, streaking three lengths clear of Havana Beat having always been well positioned off an even gallop.

Roger said: “Monotype has some good form to his name and he looks well suited by 1m4f. He handles some ease underfoot, so I hope he can go on from this and enjoy a productive autumn. Congratulations to Sheikh Mohammed Obaid.” 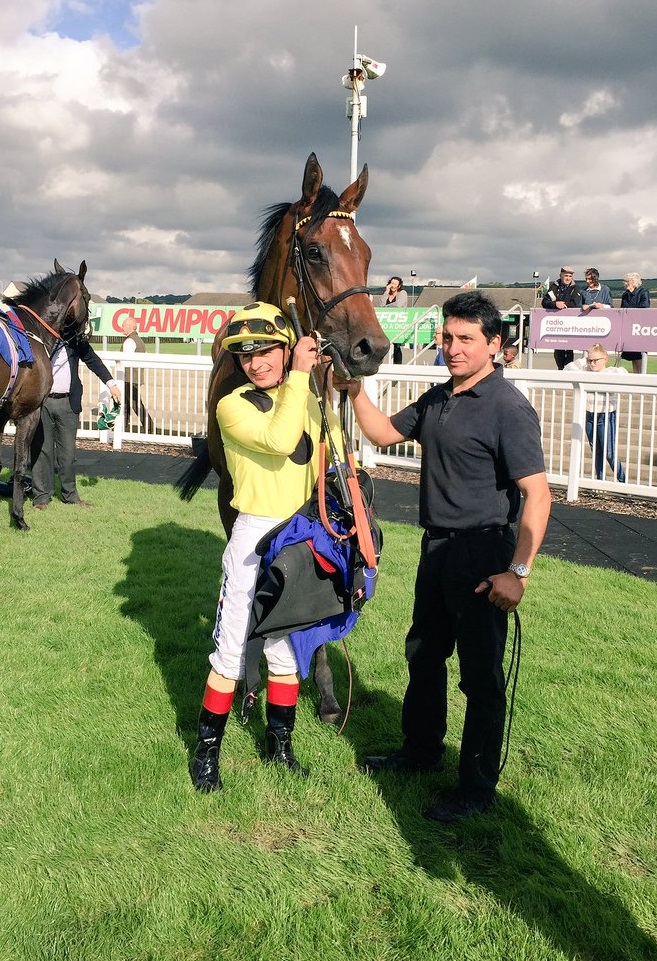 Monotype after his victory on Sunday.