Partnered by Sheikh Hamdan’s retained rider Jim Crowley, Ekhtiyaar captured this £100,000 prize by a head having travelled strongly in the first half of the race before being forced to switch for room as the action turned up a notch approaching the final quarter mile.

While the gaps briefly threatened to remain closed on Ekhtiyaar, the son of Bated Breath made the most of an emerging seam against the far-side rail, showing an excellent attitude to reel in the Kevin Ryan-trained Tommy Taylor and land the spoils by a head.

This was the second time in three starts that Ekhtiyaar had to navigate a troubled passage while winning at Newmarket, his victory on the Rowley Mile in May also highlighting both his tactical speed and his gritty, head-down approach to his craft at the business end of a race.

A 110,000 guineas purchase at Book 2 of the Tattersalls October Yearling Sale, Ekhtiyaar is a half-brother to Group 3 winner New Providence, and he looks capable of emulating his sister and making his mark in Pattern company before too long.

Roger said: “Ekhtiyaar found the ground too lively at York and the rain we experienced earlier in the week ensured these conditions were ideal for him.

“The stiffer test at the trip also helped and he showed both good tactical speed and an excellent attitude to beat this improving bunch of sprinters.

“He holds an entry in the Stewards’ Cup, although he wouldn’t be certain to get in, even under a penalty, and we’re in no rush with him as he remains an exciting prospect for both the remainder of the season and beyond.” 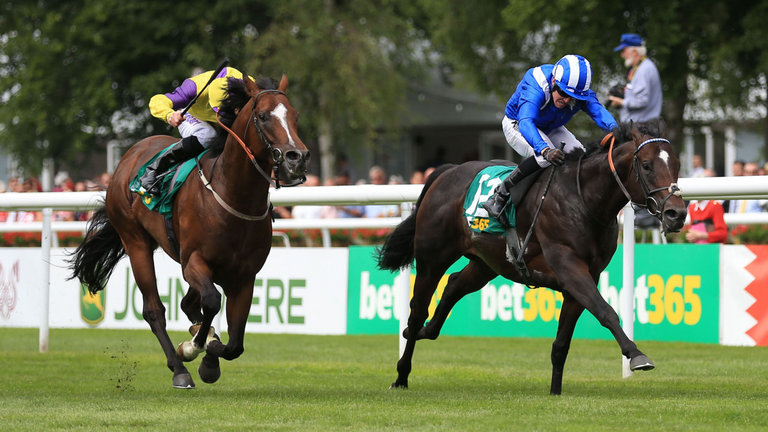 Ekhtiyaar (right) gets up close home to land the spoils on the opening day of the July Meeting.