Tantshi's Salisbury triumph was followed up by the Sheikh Hamdan-owned duo of Deglet Noor and Tajheez at Kempton.

Deglet Noor, a big daughter of New Approach, overcame greenness to win on her debut over a mile under Dane O'Neill.

Settled toward the rear, Delget Noor made eye-catching progress rounding the final bend and got on top deep inside the final furlong to win by a head.

Paul Hanagan got the leg-up aboard Tajheez who won for the third time this year when taking a 1m3f handicap. His task was made easier with two fancied horses not running, but he quickened away smartly to win by two and a half lengths.

Roger said: "The horses have bounced back and are in great form. Deglet Noor is a nice filly, she has had a few soundness issues but is well-bred and hopefully has a future.

"Tajheez started this season off 62 and has now won three times and been placed on his other three starts. He is a consitent performer who is on the up." 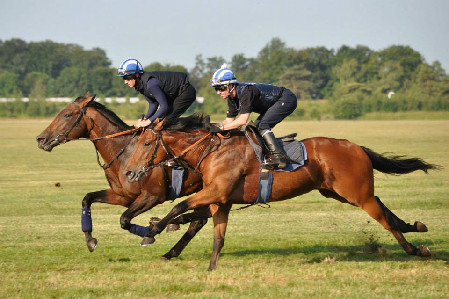 Tajheez (near side) works under Richard Hills on the watered gallop