Owned by Sheikh Mohammed Obaid, Defoe landed the prestigious London Gold Cup at Newbury under a masterful ride by Andrea Atzeni, lengthening up the home straight to collar long-time leader and warm favourite Mucho Applause in the final one hundred yards.

A son of Dalakhani from the further family of Prix de l’Arc de Triomphe runner-up Mubtaker, Defoe looks just the sort to continue his progression with time and distance and a trip to Royal Ascot could be on the cards.

Roger said: “Defoe is a very relaxed horse and he switched off well. He has the right temperament to run in testing ground because you can’t burn energy on it.

“We’ve put him in the Queen’s Vase, but we will see how he comes out of the race before making any firm plans. He’s exciting, lightly raced and has a future ahead of him.”

Twenty-minutes later, Ekhtiyaar secured the double in the six-furlong handicap at Newmarket under a power-packed Silvestre de Sousa.

Owned by Sheikh Hamdan Al Maktoum, the son of Bated Breath finished runner-up on his reappearance in a warm race at Doncaster and he built on that form here, defying a troubled passage in the Dip to forge his way to the front in the driving rain meeting the rising ground.

Roger said: “Ekhtiyaar is an improving sprinter who handled the ground, although he won’t be inconvenienced by a return to quicker conditions. He showed a good attitude having met trouble in running and he I think he has lots of potential.” 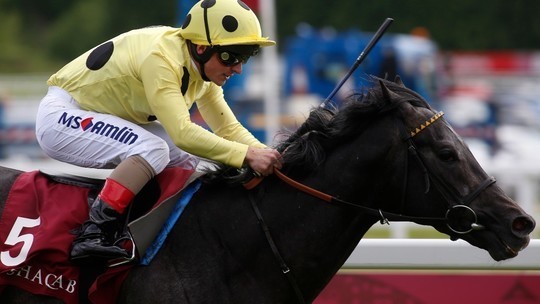 Defoe and Andrea Atzeni land the London Gold Cup at Newbury on Saturday.