Rowley Mile racegoers will be treated to an exclusive on-course commentary by seven Newmarket trainers, all of whom will be hoping to win the Julian Wilson Award for best commentary.

That accolade went to William Haggas last year and the defending champion will have to fend off the dulcet tones of Michael Bell, David Simcock, Gay Kelleway, George Margarson, Mick Quinn and Roger if he is to defend his crown.

In another great event, Roger will once again be back in the saddle for the show jumping extravaganza on the Sunday.

He will be competing against fellow trainers and jockeys back at the Rowley Mile, with the show jumping competition rounding off a packed Sunday that includes a charity football match and a food and drink festival.

Roger said: “The inaugural Newmarket Open Weekend was a lot of fun last year and the event is a great way of raising a lot of money for good causes. I’m looking forward to getting behind the microphone on Saturday – let’s hope I call the right one home!”

Other events held over the open weekend include tours at the National Stud, Tattersalls, Newmarket Equine Hospital and numerous trainers’ yards that will be open to the public.

To support Roger in his chosen events donate now at https://www.justgiving.com/teams/NOWTrainers all proceeds go towards the chosen beneficiaries.

Or for an Open Day itinerary and ticket prices visit www.newmarketopenweekend.co.uk 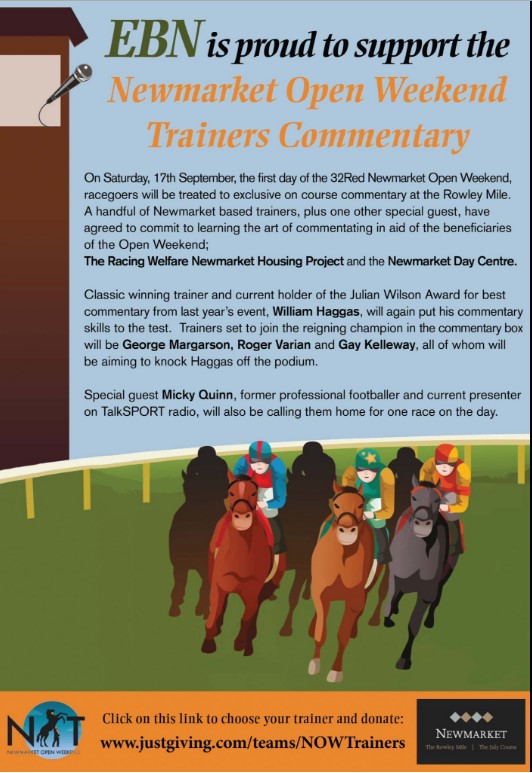