Prince Faisal's colt was the outsider of the six runners but he has always worked like a top horse at home and it all clicked for him yesterday.

Andrea Atzeni settled the son of Lope De Vega on the heels of the leaders. He settled beautifully in the first-time hood and moved fluently on the soft underfoot conditions.

Belardo was full of running as they approached 'The Dip' but was trapped behind a wall of horses. Andrea never panicked and when the gap came Belardo showed great courage to push his way through before powering clear.

He ran on strongly in the closing stages, passing the post two lengths clear of the runner-up Kodi Bear.

A delighted Roger said: "Belardo has always worked like a top horse at home and he won like one at Newbury. The Champagne Stakes was a mess of a race but we still had to reverse form with Estidhkaar.

"He was too keen that day but has relaxed beautifully in the hood and the better gallop has suited him. He was brave to go though that gap and showed what a good turn of foot he has.

"It's very exciting to go into the winter with two proper Guineas contenders."

Andrea added: "I have always thought that this was one of the best two-year-olds I have ever ridden and he has proved that today. He has a great turn of foot and the hood has helped him settle better."

Belardo's victory on the Rowley Mile caps what has been a terrific month or so for the team. Kingston Hill provided both Roger and Andrea with a first domestic Classic in the St Leger just 24 hours before Cursory Glance staked her 1000 Guineas claim with victory in the Group 1 Moyglare Stakes at The Curragh. 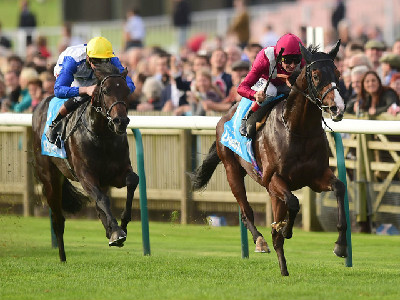