The son of Lope De Vega shaped well when a fast-finishing third in the Challenge Stakes at Newmarket eight days ago and Roger had been pleased with him since that run.

He travelled well at the rear under a patient ride by James Doyle. The winner, champion miler-elect Solow, got first run and had put the race to bed but Belardo motored home and was beaten under a length into second.

Owned in partnership by Godolphin and Prince Faisal, Belardo won the Dewhurst Stakes in impressive fashion last season, earning him the accolade of Champion two-year-old. He had failed to match that effort so far this season so we are delighted that he showed his true colours today.

Roger said: "It was a great run and we're pleased with that, he ran very well in the Challenge Stakes at Newmarket from where he had to come from, but he needs riding like that. Being 'cold' early on - that's how he won a Dewhurst.

"We would have preferred to have won, but we are pleased that he put up a high-level performance and I think he has made a case for staying in training next year.

"I don't think there is anything else this season for him, but James Doyle thinks he will get further.

"It was a shame they went slow early on, but we are delighted with the horse as it reminds people of what a talent he was last year." 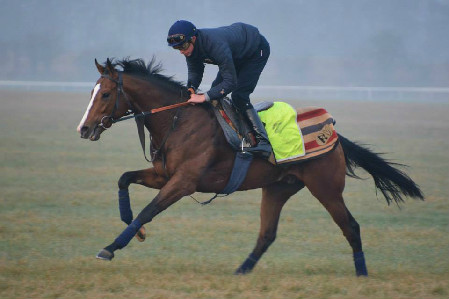 Belardo on the Newmarket gallops under James Doyle