The son of Galileo had to overcome a wide passage throughout due being drawn in stall 16, but he travelled with ease under Graham Lee before going on to score impressively.

Carrying the colours of HRH Sultan Ahmad Shah, Graham and Battersea moved up rounding the final bend, coming to the leaders on the bridle.

When he pressed the button, Battersea asserted and soon went clear. Graham pushed him out under hands and heels to win eased down by a length and a half.

Roger said: "The penny dropped with him at Newmarket when he was beaten by Maid In Rio a couple of starts ago and that one has won a couple of times since. Then he came here and won and he has built on that today.

"It was a competitive field today and I was impressed how he travelled through the race and then quickened.

"We were lucky that the ground stayed fast. He is a fluent mover and wouldn't appreciate soft autumn ground. This will dictate whether we run again this year.

"If the weather breaks then we shall put him away - he will make a cracking four-year-old." 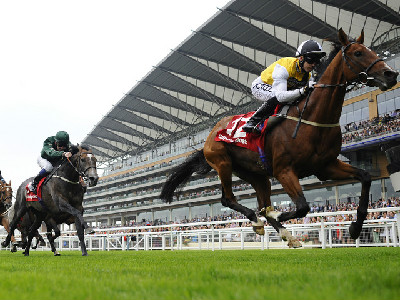