BARADAR was well supported in the market ahead of the first division of the 7f maiden at Newbury on Sunday and he went about his business like a seasoned professional to pick off his rivals one by one and win by ¾l.

Amongst a field of smartly bred individuals representing top stables it was Baradar, a precocious looking son of Muhaarar, who claimed favouritism. It was reported before the race that some of his rivals were scopey types that may just need their first run and even though Baradar was relatively slowly into stride and raced towards the rear, he showed a natural aptitude for racing to make up the required ground and get his head in front where it mattered.

His half-brother and stablemate Roseman won a Listed race on heavy ground at Newmarket last season and put up a huge performance to finish fourth in the G1 Queen Anne on good to soft ground this year, so it was no great surprise to see Baradar cope as well as he did with the testing conditions at Newbury on Sunday. Their dam, Go Lovely Rose, is a full-sister to the dual Group 1 winner Immortal Verse. 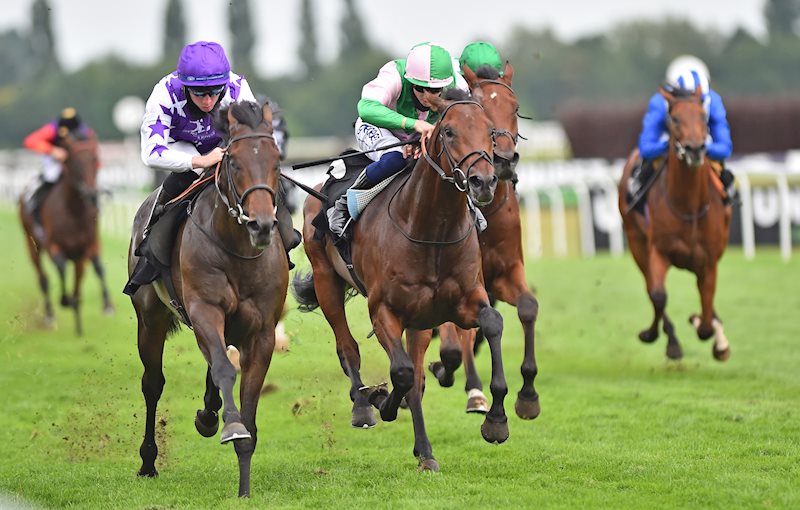 Baradar at full stretch in the closing stages at Newbury

Another Varian Stable inmate to get off the mark on Sunday was ZEEBAND, who carried a light weight to victory on his handicap debut in the Class 3 Handicap (0-90) over 1m6f at Ripon. This three-year-old son of Sea The Stars is the largest horse at Carlburg Stables and so it is not surprising that he didn't make his racecourse debut until June this year. He has taken a huge step forward with every start and it was great to see him win on only his third racecourse appearance. His half-brother Danadana was a smart 10f horse for Luca Cumani and hopefully Zeeband can continue on an upward curve now that he's got his head in front.