Saleh Al Homaizi's daughter of Canford Cliffs made a promising debut in a strong maiden at Doncaster in early June and stepped up on that to win decisively under Philip Makin.

She travelled strongly in behind runners and for quite some time it looked as though the gaps wouldn't come. Makin bided his time and when the runners opened up when they turned for home he asked Aneesah for her effort.

She was closing quickly on the leader Tholen and got up in the shadows of the post to win by a head.

Roger said: "Aneesah has always shown plenty at home and has stepped up from her debut. She was value for a bit more that the winning margin and we shall probably look to get some 'black type' with her now."

Aneesah picked up the lion's share of £10,000 for winning and also secured up a Plus 10 bonus for her owners.

In addition to victories for Aneesah and Atletico, Roger sent out no less that five seconds yesterday from seven runners. 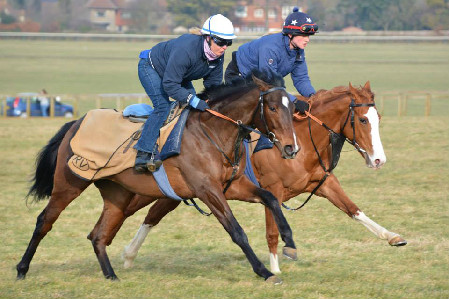 Aneesah, near side, on Warren Hill grass this spring