It was a second career win for the son of Captain Rio, who was sold to HH Sheikh Mohammed Bin Khalifa Al Thani following his good second to subsequent Queen Mary winner Rizeena in the National Stakes at Sandown.

He ran with credit in the Windsor Castle Stakes at Royal Ascot, suggesting that he would be suited by a step up in trip.

There were only four runners in yesterday's contest but the field were taken along at a decent tempo by Captain Whoosh.

Jockey Andrea Atzeni tracked the leader with Paul Hanagan aboard the odds-on favourite, Zaraee, right in his slip stream.

Andrea asked Andhesontherun for his effort at the two furlong marker and he picked up well to take the lead. Zaraee and the eventual third Left Defender launched brief challenges but Andhesontherun was well on top at the line, winning by a length anda a half.

Roger said: "He got a little bit lost in the Windsor Castle where I felt he raced on the unfavoured side. His form prior to that was solid and it is great that he has got his head in front again. He will step up in grade again now." 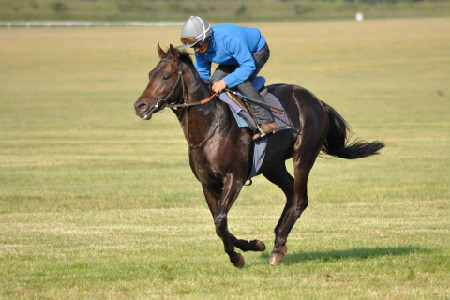