Owned by Sheikh Mohammed Obaid, Ajman Princess was sent off the 1-20 favourite to get the better of three rivals in an uncompetitive event, her rating of 107 presumably frightening most of the opposition away in an innocuous all-weather maiden.

The daughter of Teofilo, who gained her lofty mark with a fine second in the Group 2 Ribbelsdale Stakes at Royal Ascot last season, won as her prohibitive price suggested she should, making all under Andrea Atzeni and never coming out of second gear in the straight.

A return to stakes company now awaits Ajman Princess, who could be aimed at the Listed Daisy Warwick Stakes at Goodwood in May, while we hope this win is the first of many as the Flat season gets underway at Doncaster tomorrow.

Roger said: “We are delighted Ajman Princess is now a winner and the victory justifies Sheikh Mohammed Obaid’s decision to keep the filly in training. She is already a very valuable black-type performer through her Royal Ascot exploits last season and we will now look to make her a stakes winner, with a return to twelve furlongs at Goodwood the logical port of call.” 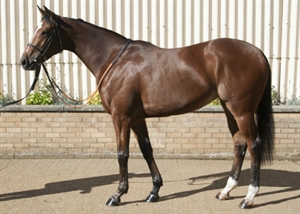